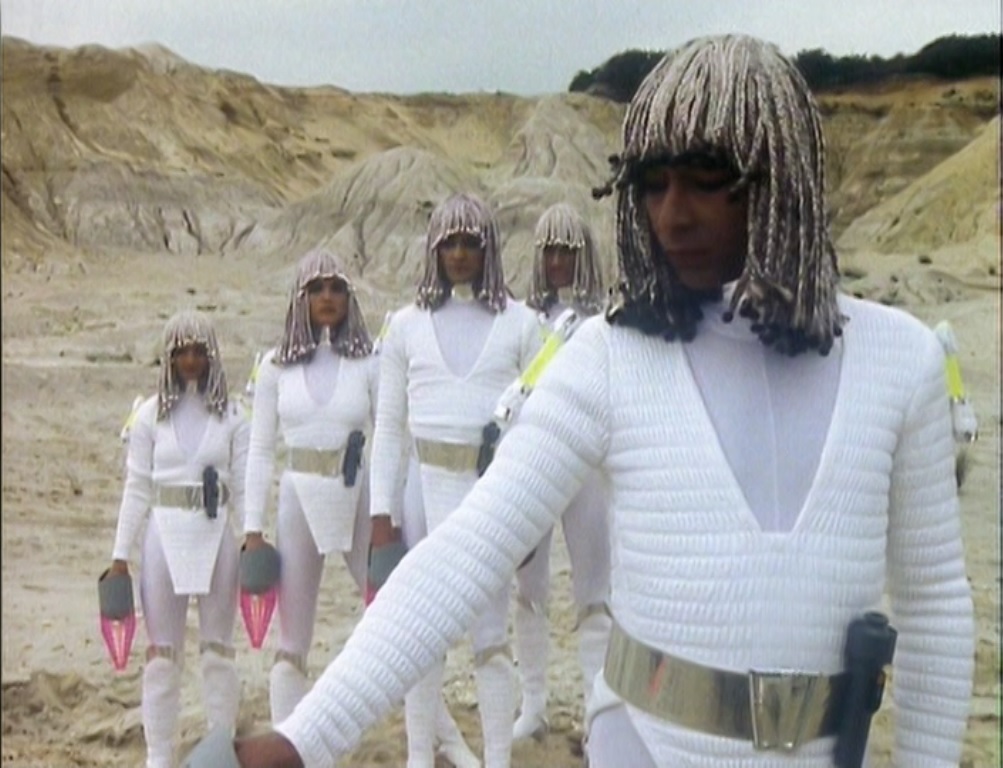 Yesterday, I said there was a third thing about the otherwise boring “Destiny of the Daleks” that’s worth a hoot, and here they are: the space age disco robots, the Movellans. Apart from a few mentions and about a two second cameo in the 2017 story “The Pilot,” the Movellans retreat into obscurity after this, but I like them for some dumb reason. They’re so wonderfully seventies. Over in Hollywood, Buck Rogers in the 25th Century (which we’ll be watching quite soon) was in production at the same time as this serial. It’s the stupid crossover that totally should have happened: Ardala teamed up with the Movellans to boogie on down with Buck in New Chicago. The soundtrack, because it was an American show, might have been “A Fifth of Beethoven.”

Several chapters ago, I gave the About Time series an unusual-for-me sneer because Miles and Wood’s analysis just started digging up garbage as they coughed up some downright dumb material for season sixteen. True, Lawrence Miles has always obsessed over questions nobody else cares about – he once spent six hundred pages across two novels because he wanted to know who owned the junkyard where the TARDIS was first parked – but there’s some genuine pablum midway through volume four. Anyway, they redeemed themselves with a little gem talking about “Destiny of the Daleks.”

In 2003, I bought Placebo’s album Sleeping With Ghosts, which came with a bonus CD of ten cover versions. One of the tunes they did was something I’d never heard of called “Daddy Cool.” I thought it was pretty good, filed it, and mostly forgot about it. Years later, About Time drew a line between the Movellans and Boney M., a based-in-West-Germany disco act with about four dozen members, sometimes all on stage at once, who originally performed that song. Sometimes I go off on musical tangents – this paragraph is proof of that – but friends, I have watched the absolute hell out of Boney M. on YouTube for the last two months. My friends and I were so busy being punks in the late eighties hating disco for whatever its sins were that I never looked back and missed out on how gloriously ridiculous and fun some of it was. Emphasis on some.

Look. Here’s Boney M. at the Sopot International Song Festival, literally the weekend before “Destiny of the Daleks” first aired in the UK. Watch this and you’ll have disco-dancing Movellan fever for good.

Back in our living room, meanwhile, our son came around and really enjoyed this story’s climax. The Doctor flings his hat onto one Dalek’s eyestalk and it goes completely nuts and starts shooting everything and he was in heaven. Then all the suicide-vest Daleks blow up in a series of detonations and he darn near melted that was so wonderful. Once again, a Who adventure starts out weird for him, gets creepy and unpleasant, and ends triumphantly. I’m sure he’ll dream of exploding Daleks tonight.

One thought on “Doctor Who: Destiny of the Daleks (parts three and four)”