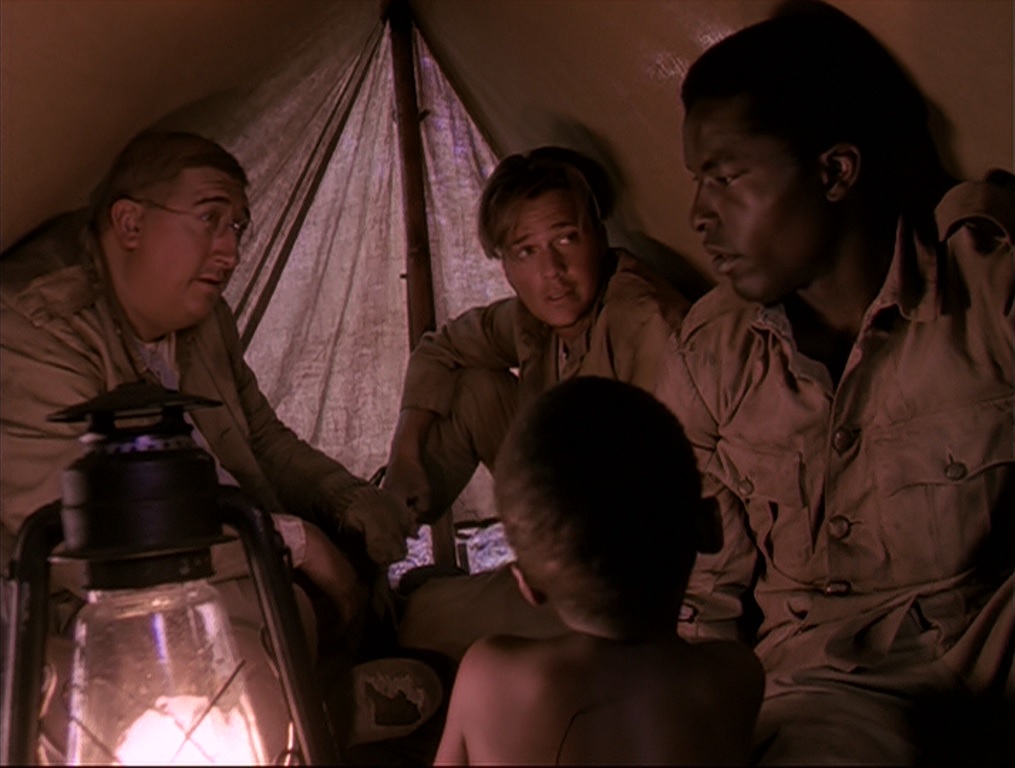 We’re back, in time for one of the most bleak and thought-provoking stories that they did for Young Indiana Jones. This time, Indy gets a promotion to captain and then a horrible assignment. Under the command of Major Boucher, they have to lead a company across about two thousand miles to retrieve some badly needed machine guns after the boat ran aground on Africa’s west coast. Yellow fever and smallpox are rampant, and many, many people die.

An actor from Côte d’Ivoire, Isaach de Bankolé, has the key guest part of Sergeant Barthélèmy. Indy is spouting the lines about how once Germany gets kicked off the continent, then the Africans can begin their own rule, but Barthélèmy’s not buying it. This is a white man’s war. Things reach boiling point when the sergeant disobeys orders and brings along a small child, the lone survivor from a village where everyone has died of plague. The major can’t quell the brewing mutiny, and when Indy actually puts a gun to his superior officer’s head, you can cut the tension with a knife.

This and the next episode were written by Frank Darabont, and they were chosen to close the original six-week run of The Young Indiana Jones Chronicles on ABC. I remember watching this part of the story in my dorm room just amazed that something so good, and so bleak, was on TV. It also probably explained to about nine million people what that line about “Belgians in the Congo” in that aggravating Billy Joel song meant. The spread of this war, the white man’s war, to Africa just isn’t known very widely here. This is why so many people have reacted so strongly and so positively to the depiction of Wakanda in Black Panther, which, incidentally, also featured de Bankolé in a very small role. When you see in stories as vivid as this just how monstrous and how pointless the history of colonizing was, it’s no wonder Panther found such acclaim. We certainly had a lot to talk about with our son tonight.