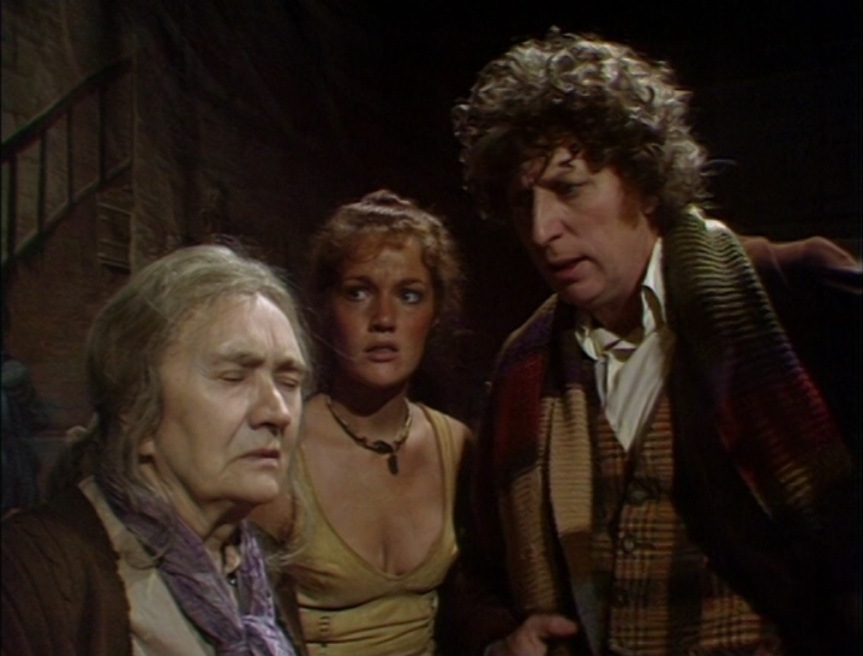 You know, I just didn’t enjoy this as much as I thought I was going to. I do enjoy the way that I’ve found lots more to like about some Who adventures, especially “The Mutants” and “The Time Monster,” than I thought that I would, so I guess the flip side is that naturally there would be one or two that drop down a couple of pegs from my remembrance to reality.

“Image of the Fendahl” is a really flawed story, particularly when everything starts to revolve around the Satanic coven that one of the four scientists has been leading in his spare time. It’s something that should have been developed and explored, but because there was such a huge money crunch during this period of the program, it’s even less convincing than the coven in the broadly similar Jon Pertwee-era adventure “The Daemons.” I particularly “like” the way that the only member of Stahl’s coven with a speaking part is also the only character in the village that we meet other than the two characters who help our heroes. Devil’s End felt like a real place because we saw it and all the dozens of people who live there. This place just exists in a TV studio.

So it fails at a lot of important things, but I still appreciate it because the tone is just right. This is prime “scaring children” Who, from an era where the horror is largely going to be swept aside for light sci-fi action like we saw in the previous adventure. In this, it succeeds, because our son tells us that this was really scary and “totally creepy.” This and “Fang Rock” both feel like holdovers from the three seasons of the show that Philip Hinchcliffe produced. The way forward is going to be much breezier.

I think that Tom Baker and Louise Jameson are both really good in this adventure, even if the guest cast all seem under-rehearsed. Dennis Lill and Wanda Ventham would be back in stories in the 1980s and I think they did better and more convincing jobs as their characters in those, and there’s a guy named Edward Arthur who seems to be doing a very good impersonation of Ian Ogilvy rather than making me believe that he’s a scientist who’s in over his head. So there’s a lot that boring old people like me can grumble about, but any story that gives seven year-olds the creeps can’t be called a complete failure, and while our son didn’t have a lot to say about this one, he seemed to enjoy it.

One thought on “Doctor Who: Image of the Fendahl (parts three and four)”