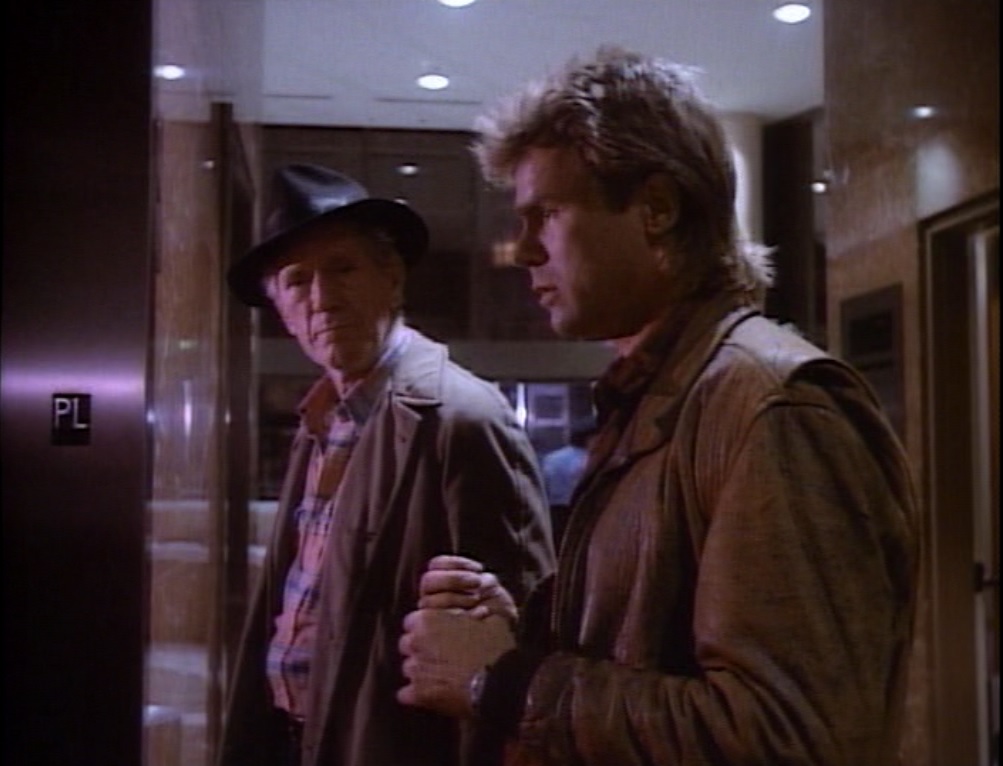 I’m still not entirely sure what the heck the Phoenix Foundation actually is. They keep calling it a “think tank,” but the actual scripts seem to keep using it as a place full of bomb disposal experts and MacGyver seems to keep getting the sort of missions that real world think tanks like the Rand Corporation never send people to solve. Maybe Phoenix just hoovers up all the veterans and mercenaries and adventurers and soldiers of fortune they can find, just in case they run into a story that needs one or two.

But I’m just nitpicking. It’s not like anybody ever lost sleep over an episode of The Champions wondering what the heck Nemesis actually did. In Stephen Kronish’s “Phoenix Under Siege,” we learn that the Phoenix Foundation keeps disarmed bombs in a lab on the fifth floor of a Los Angeles office building. It’s December 14, 1986, and the Edmonton Oilers are in town to play the Kings. MacGyver’s grandfather Harry, who we met last season, has come to town to see his grandson and see Gretzky, and Mac left the tickets in the office. (This can’t have done the North Stars’ PR people any good, suggesting Minnesotans would rather take a bus to Los Angeles than see the North Stars at home.) Simultaneously, a terrorist employed by a nebulous “liberation front” arrives with three lackeys to reactivate one of her dormant explosive devices.

For a low-budget “running around an office building at night” story, this wasn’t bad at all. It seems logical that they would balance some of the all-location stories with some that were made almost totally in a studio with a smaller cast, and this one worked well. Tricia O’Neil is really entertaining as the believably ruthless terrorist, and Jack Anderson is fun as Harry. I actually picked this story last year because John Davey, the second actor to play Captain Marvel in Shazam!, is in it. Unfortunately, it’s just a two-line blink-and-miss-it part as a state trooper in one of the story’s several flashback scenes.

One thought on “MacGyver 2.11 – Phoenix Under Siege”