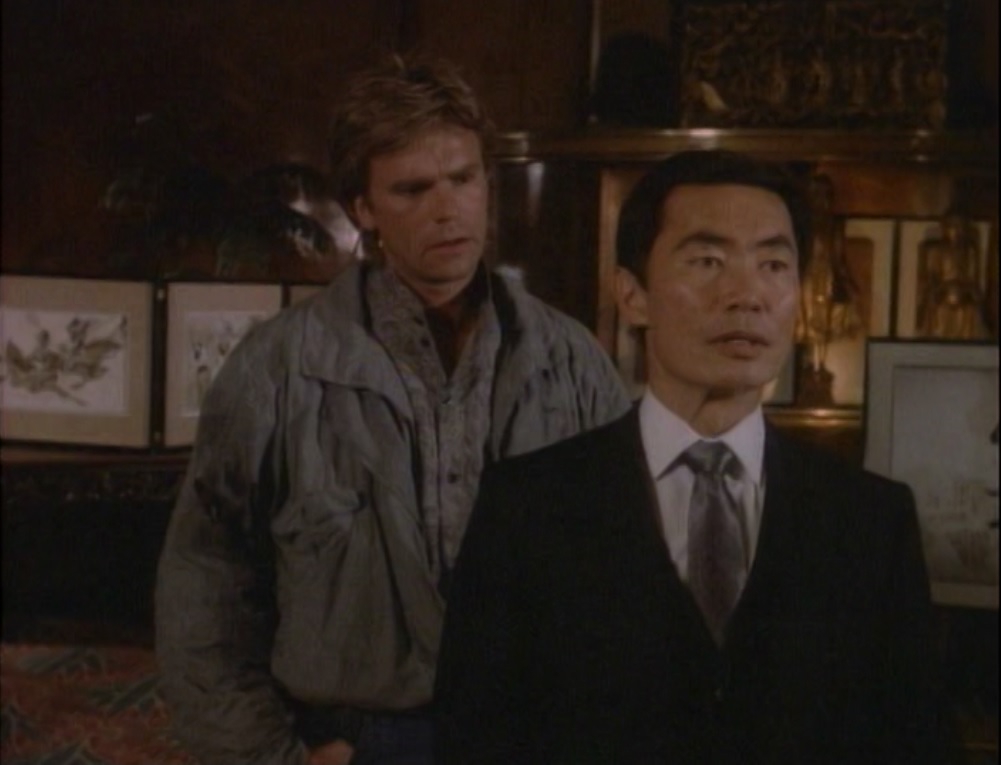 I picked tonight’s episode of MacGyver because George Takei is in it, but it turned out to be among the better episodes that we’ve seen. “The Wish Child,” written by Stephen Kandel and Bill Froelich, is about a scam that a Chinatown con artist is playing on a very wealthy sucker, played by the prolific James Hong, who has indeed been in just about everything. IMDB lists him with an amazing 424 credits, and even though most of his most recent work has been voiceovers, you’ve seen or heard him in a thing or twelve. Tia Carrere also appears in a small part, topping and tailing the episode as another very good friend of MacGyver’s that we never hear about before or after this story.

Our son was most taken with the bit that I also enjoyed the most. In order to get on board Hong’s character’s freighter, MacGyver coats himself with dirt, grease, and oil, and stomps past the guards carrying a random assortment of machine parts. His voiceover explains this as an old Minnesota trick: he’s filthy enough to register as untouchable. Nobody wants to touch the untouchable!

Takei’s character meets his end in a remarkably silly scene. It turns out the wealthy sucker may be gullible enough to fall for a scam about the reincarnation of a legendary “wish child,” but he’s also a ruthless criminal himself who intends to enslave the boy and kill any witnesses. So Takei takes a bullet to the chest while he’s talking to MacGyver, and the assassin just leaves… but MacGyver’s heard the whole story and is now a witness to both the scam and the new murder. Talk about a loose end! I bet that assassin doesn’t mention this when he gets a job interview with some other ruthless criminal.