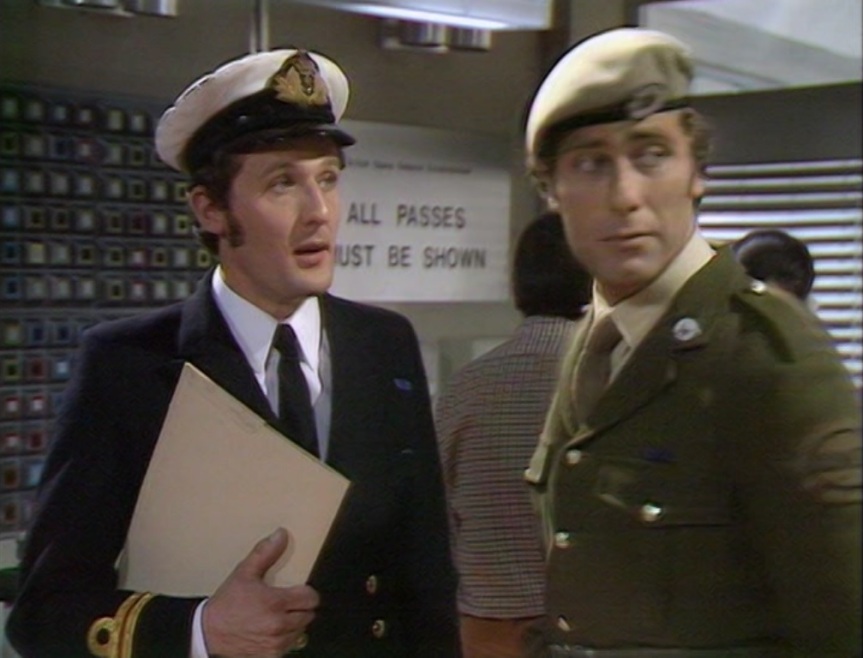 Good grief, what a mess. The only reasons to watch the second half of this story are to see Tom Baker and Elisabeth Sladen rising way above the material with wit and charm and sparkles in their eyes, and to say goodbye to Ian Marter and John Levene, who make their final appearances here. It’s the last UNIT story of the seventies – and no, it’s not an “epilogue,” it’s got precisely the same number of regular UNIT characters as “The Invasion” or “The Silurians,” even if Nicholas Courtney isn’t in it – but because nobody making the program had definitively decided that, we didn’t get a proper goodbye to any of the characters. The Fourth Doctor says many times that he hates goodbyes, but audiences kind of like them. It would have been nice to let the Doctor actually tell his old friends that he isn’t going to be their scientific adviser anymore, shake hands, and wave farewell.

Subbing for Courtney in part four is Patrick Newell as Colonel Faraday. I’m predisposed to like Newell, a fine character actor best known for the recurring role of Mother in the Tara King years of The Avengers, but the script doesn’t give him anything interesting to do and the only idea anybody had for him seems to be “don’t imitate Courtney.” When some anonymous soldiers turn up at the end of the season with UNIT badges – now that really is the epilogue, not this – Colonel Faraday isn’t with them. Corporal Bell had more screen time than Faraday.

As for the rest of it, it’s all just bad guys talking tough and not staying around to see the trapped hero’s doom, unbelievably gullible patsies who believe the best, that sort of thing. Mission Control is a blue chromakey screen hung in front of a black curtain while four technicians act like they’re in a Gerry Anderson show and spend about a full minute counting things down instead of showing us anything interesting. That’s because the visual effects are either more stock footage of American rockets, or director Barry Letts returning to his weird old trick of blue-screening actors in front of a photograph. Doctor Who was a low budget program, true, but this is one of the most egregious examples in the 1970s of just plain looking cheap.

And then there’s the eyepatch. I did warn my wife that one of the all-time “oh, baloney” moments is in part four. I think that somewhere, something went awry in rehearsals and they didn’t have time to do this right. Twice, the Doctor tells Milton Johns’ character “You’ve been brainwashed,” and I am perfectly willing to accept that part of that brainwashing was making the man think he lost an eye in a rocket crash. That would have been just fine. Except what we see on screen is Johns removing his eyepatch, and, instead of forcing himself to fight the brainwashing and the illusion and realize, dramatically, that his eye really is there, he just takes off the patch and boom! There’s his eye! Styggron has been lying all this time!

And except for there was no reason whatsoever for Styggron to make him think he was missing an eye. It is utterly irrelevant to the drama except to give the character a chance to realize the Kraals are evil, and to make him look like Scott McCloud, Space Angel, when he’s in his astronaut suit and helmet.

Our son wasn’t wowed by this deeply dumb moment, but he did enjoy this story much more than he was willing to admit yesterday. This is definitely Doctor Who for six year-olds. He confessed that he really wasn’t scared by the first half (we knew) and gave this a mostly thumbs-up. He didn’t like that there was an android duplicate of the Doctor, but he loved our hero having a brawl with it.

With that in mind, as I mentioned, this is the final appearance in the show for John Levene and Ian Marter. Levene largely left the acting business after this and has lived in California since the early 1990s. I was surprised to see that he made an appearance in Beetleborgs, one of those Haim Saban programs that repurpose Japanese sci-fi teevee footage into an otherwise American show. Marter appeared frequently on television and in movies in the 1970s and early 1980s and also became a writer. He specialized in both Who books for Target and, under the pen name Ian Don, other novelizations of feature films like Splash and the dinosaur movie Baby: Secret of the Lost Legend. He passed away of a heart attack on his 42nd birthday in 1986.