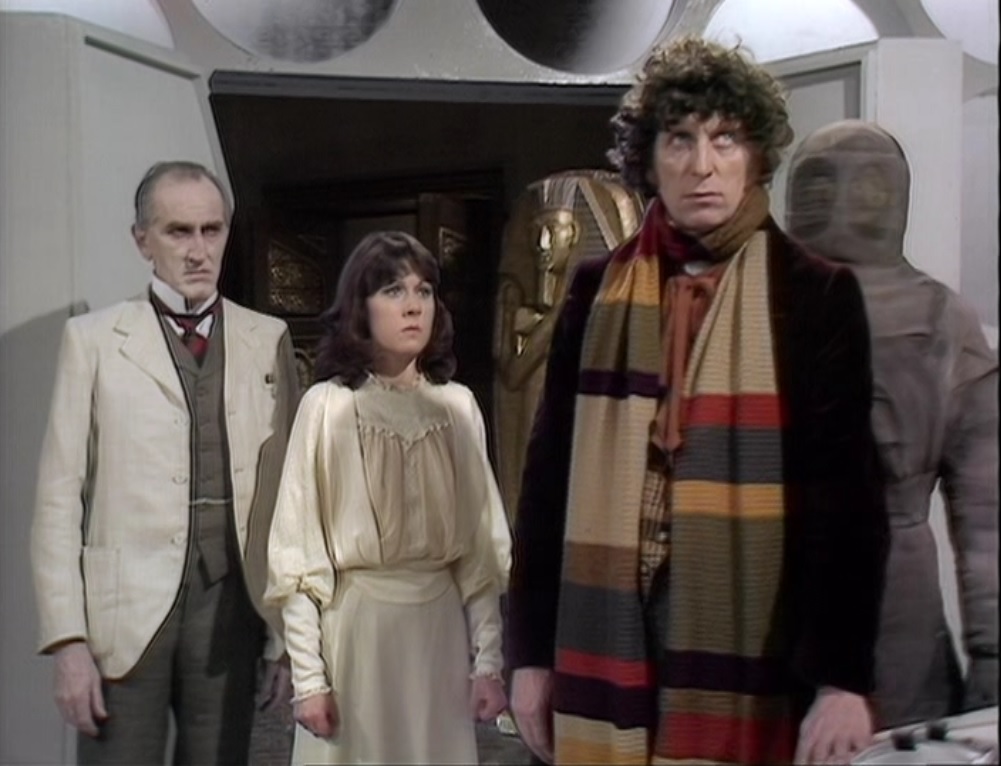 Our son was still about as frightened as a kid could be during the second half of this adventure, so much so that we had to pause during part four to get him to calm down. He was distracting himself from the horror onscreen, which reached new depths when Sutekh took control of the Doctor’s mind, first by firing an imaginary gun at Sutekh with a growl, and then by, I’m sorry to say, belching. And then giggling about it. You try to be understanding. He is just six and needed a distraction from one of his heroes being used as a plaything by the most evil and powerful creature in the cosmos. But man, was it an obnoxious mood killer!

Anyway, I think there’s an unheralded moment in this story. I think this is the first time, at least the first in quite a while, that evil forces take control of the TARDIS. I remember the villains came on board, briefly, in “The Enemy of the World” and in “The Claws of Axos,” but is this the first occasion where something as awful as this happens? It really adds to the feeling of gloom.

I think it’s an absolutely terrific production. Many people call it one of their favorite Doctor Who stories from the era for good reason. There are a few brief moments of sparkling wit among the incredibly high stakes, and Tom Baker and Elisabeth Sladen are fantastic together, especially in part three when the Doctor shows no emotion at all when Michael Sheard’s character is found to be dead, and Sarah starts to lose her temper with his dispassionate lack of what she starts to call “humanity” before checking herself. It’s scary and exciting, and people love it to pieces for a reason.

Hopefully the next story won’t have our son too terrified, but I’m a little concerned about the one after that…!

5 thoughts on “Doctor Who: Pyramids of Mars (parts three and four)”