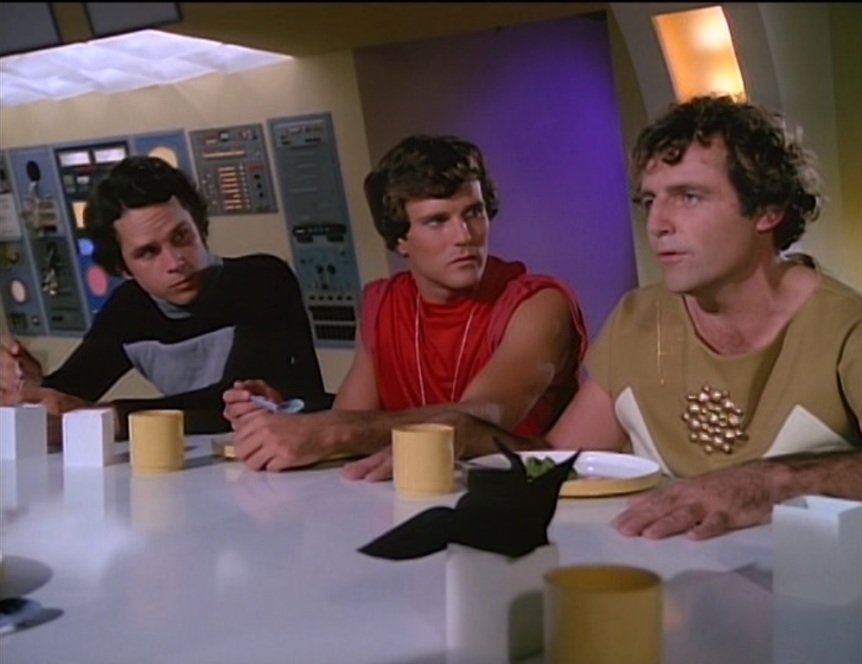 I wasn’t very interested in the previous episode of Logan’s Run while our son enjoyed it, and tonight’s was one that I quite liked while he grumbled “This is the wrong episode for me.” He wasn’t interested in this at all. In it, the Sandmen use that face-change machine shown in the movie to give a Sandman the face of Hal 14, a dissident that Jessica knows, hoping that he can find Logan outside and persuade our heroes to return and become the figureheads of a (non-existent) rebellion.

But things get complicated in a very unexpected way. Logan, Jessica, and Rem are considering returning to the City of Domes when they get captured by the very first known runner to escape, a guy named Matthew. He has enslaved a small group of simple farmers who see him as their provider, and guard his complex in exchange for a daily hour of computer-controlled “joy.” It’s a complex and clever story with a couple of satisfying twists by John Meredyth Lucas, who had written a few episodes of Star Trek, Mannix, and The Six Million Dollar Man.

The most interesting bit for me, however, was the casting. The Sandman wearing Hal 14’s face is Nicholas Hammond, who was occasionally appearing in CBS’s Amazing Spider-Man specials at this time, and the lead slave, Garth, is played by Spencer Milligan, who had left Land of the Lost a couple of years before. So here’s a rare picture of three seventies sci-fi leading men all in the same TV episode!