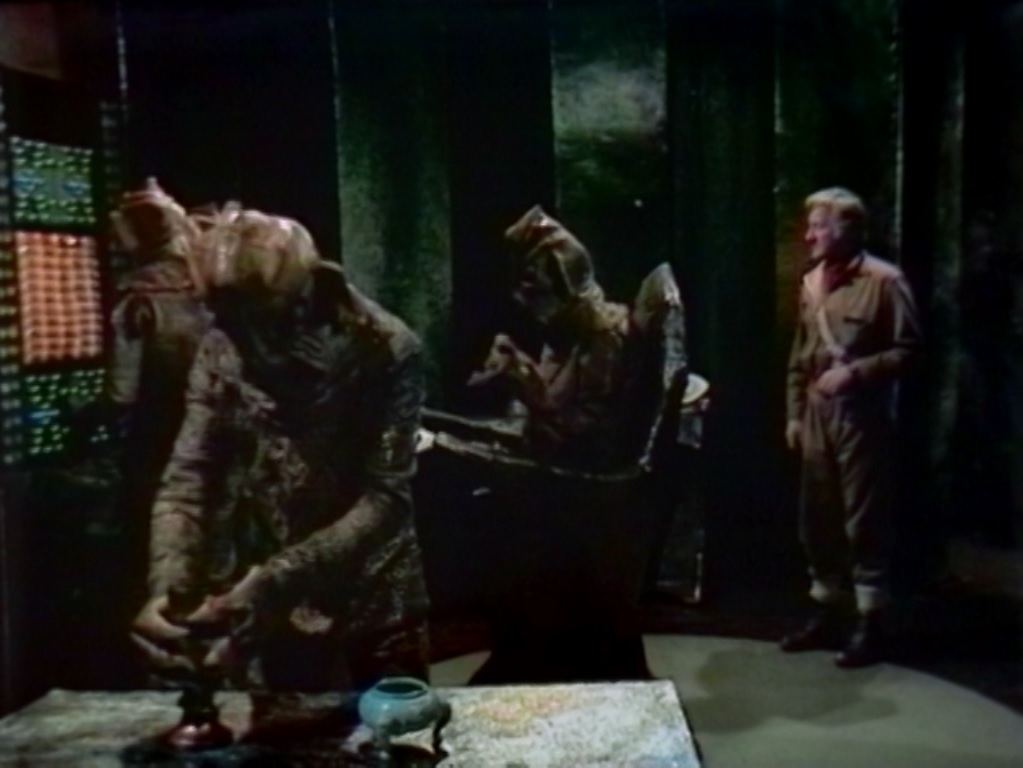 Our son has grasped the main conflict in this problem very well. He even used an appropriate word: extinct. He says that the humans and the Silurians want to make each other extinct before the other wins. He sees that the Doctor is trying to make peace between the two sides, but he also has the mind of a six year-old who’s seen every other alien life form in this show trying to blow humanity up, and so he’s rooting for the Brigadier to get down there and blow up the Silurians first. But this episode ends with the Doctor thrown into a cage by the Silurians and one of them using its strange third eye to give our hero a psychic attack.

You may have noticed that my screencaps from this story show off some very woeful color. As was standard in the seventies, the BBC routinely wiped their color videotapes of stories, and this is one that was never returned in the old 625-line PAL format in color. The BBC retained 16mm black-and-white films for export, and an inferior 525-line NTSC color copy was returned in the eighties. In 1993, they mated the two, putting the color signal from the poorer copy into the better-resolution black-and-white print.

Fifteen years later, they improved on it somewhat, but it’s still notably below the quality of most of the other Pertwee serials. I believe that episode four is the poorest of the seven. There are lines of yellow across the red walls of the conference room throughout, and there’s a scene in the cyclotron room where Peter Miles is yelling at a technician, and the poor guy is under siege by a blue band of color on the wall behind him that is attacking his hair.

Episode four is also notable for introducing Geoffrey Palmer to the story. Like Fulton Mackay in the preceding episodes, Palmer was a very recognizable face to TV audiences in 1970, but his biggest roles were ahead of him. As Mackay became a big star with the sitcom Porridge later in the decade, so did Palmer, with the sitcoms The Fall and Rise of Reginald Perrin and Butterflies. Palmer plays the first of several civil servants and government types whom the Doctor, over the course of the next five seasons, gets to chew up and spit out.

We’ll take a quick break from this story and resume it over the weekend. Tomorrow night, more mean cave monsters.

One thought on “Doctor Who and the Silurians (part four)”