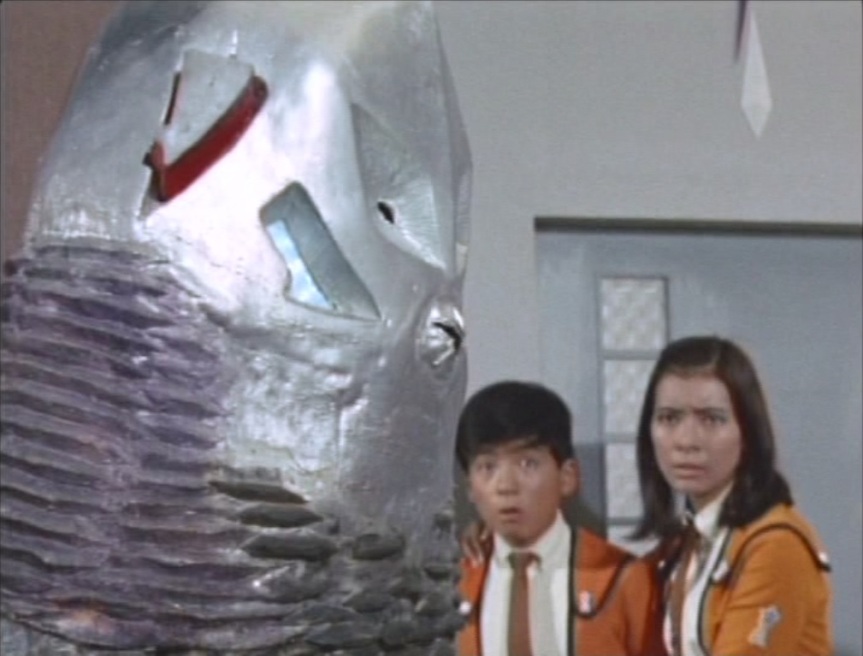 I have to say, I really prefer the episodes of Ultraman where they’re fighting an intelligent alien villain instead of some long-buried dinosaur. This week’s show introduces another menace who’d become a recurring foe throughout the many Ultra-world series, a Zarab. These aliens can hypnotize people and change shapes, and, under the guise of intergalactic brotherhood, they want to conquer us. There’s actually a plot point here that would be echoed five years later in a memorable Doctor Who serial, “The Claws of Axos,” where the selfish local government wishes to keep the alien technology for themselves instead of sharing it with the world as the alien actually wishes.

It probably shouldn’t surprise you to learn that this guy can also grow to a hundred feet tall for the climactic wrestling, but the episode throws a really wonderful curve. He first transforms into an evil version of Ultraman to smash the city. It’s not quite a perfect duplication, as he gets the eyes and shape of the head slightly wrong, but for a few minutes this had our son absolutely riveted and he was extremely excited by this fight.

I’m glad that he recovered. This episode actually had a little extra work for me, which I feared would spoil the illusion too much. See, whichever voice actor did the Zarab’s voice – Peter Fernandez, Jack Grimes, and Corrine Orr are usually credited, but individual parts are not listed – conspired to speak with a mouth full of marbles to sound all alien and weird. We could not understand anything he said. We had to give up and put on the subtitles and watch again. Then, since my boy is still a beginning reader, I had to play the role of the Zarab from the script on the screen.

The English language dub is not quite precise, as Fernandez and his team rewrote it to simplify some things and better match the movements of the actors’ mouths. So throughout, I would play the role of the alien and have a “conversation” with Fernandez as Captain Mura or Hayata, but at some points, I was actually answering questions that our heroes did not really ask, since they’d gone so far off the Japanese script!

One last point: as you see in the picture above, Captain Mura did admit in the previous episode that Hoshino is clearly more qualified to fight giant monsters and aliens than any of them and has made him a full member of the Science Patrol. (Okay, that’s me going off the original script!) Hoshino has an orange uniform and helmet of his own. No word yet as to whether he also has a gun and a light-duty blue Amway suit.