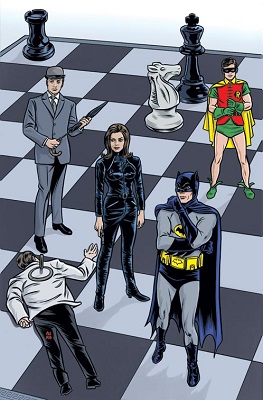 A quick little break from the routine to note that, for fans of the sort of shows we watch here – and are certainly going to watch here, later on down the line – DC Comics and Boom Studios have a new funnybook out this week that you may enjoy. Three years ago, DC Comics revived the Adam West Batman continuity in a series written by Jeff Parker called Batman ’66. I’ve only seen some of these, but they’re pretty cute, and I like the way that Parker threads together various neat little bits between the episodes, like establishing that the Mad Hatter and the Clock King are brothers. I also understand that they’ve introduced “1966” versions of classic villains who never appeared on the program, or were actually created decades later.

As an aside to this series, they’ve been doing some team-up books, in which the characters from other 1960s media properties get a long story working with our heroes, as they might have done on TV if the stars had lined up right. Each of these storylines is long enough to (presumably) get a collected book edition. In 2014, Kevin Smith wrote Batman ’66 Meets the Green Hornet, which simply can’t be any worse than the one they really did on TV, and last year, Parker wrote Batman ’66 Meets The Man From UNCLE, which has not yet been collected.

This year’s team-up is Batman ’66 Meets Steed and Mrs. Peel – you know, the proper Avengers – which is written by Ian Edginton. I’m very familiar with Edginton’s many series for 2000 AD, the Galaxy’s Greatest Comic, like Scarlet Traces, Brass Sun, and Ampney Crucis Investigates. He’s a heck of a good writer, and, teamed with Matthew Dow Smith on art duties and a cover by Michael Allred, he’s put together a good little opening story.

I wasn’t planning to buy this in single issue form (there will be six of them), but, since we’ve moved to Chattanooga, we’ve been looking for a good comic shop. Daniel and I popped into one today, I saw it on the shelf, and decided that I would read it to him. It worked really well on the reading aloud front – it turns out I do a pretty good Stafford Repp, but my Patrick Macnee is appalling – but it also works really well as a story that somebody unfamiliar with The Avengers might enjoy. Catwoman doesn’t need an introduction, but the book’s co-stars, and some characters from their show, do. He really enjoyed it, although he wasn’t pleased that there will be such a long wait to see what will happen next!

Incidentally, it’s called “Steed and Mrs. Peel” because, of course, Marvel has the trademark for any funnybooks called Avengers. Boom Studios has the current comic book rights because back in 1990, writers Grant Morrison, Emma Caulfield, and artist Ian Gibson teamed up for a comic mini-series that was published by Acme/Eclipse and which was out of print for many years before Boom correctly decided that Morrison’s many fans might like to have a copy for their shelves and bought the rights. I’m glad to see that Boom is doing something else with that license, even if the potential audience for a Steed and Mrs. Peel ongoing is probably quite small.